The 2017 French Youth Chess Championship will be held from 16 April to 23 April 2017 at Le Phare gymnasium in Belfort. Around 1,400 young players from all over France are expected to compete. They will each play nine games, players with the most victories will win the title of French chess champion and try to get the qualifying places for the European and World Championships.

Players compete by age categories, poussins and petits-poussins (less than 10 years old) will start on wednesday the 19th. The youngest players will be only five years old.

The competition will host free access to the « chess village » to offer visitors and participants many activities around chess. On the Internet, it will be possible to follow the live video event on youtube, with live commentary.

The French Youth Chess Championship is organized by the Belfort Chess Club and the French Chess Federation, with the support of the city of Belfort. It is the most important chess metting in France. Almost 4,000 people will make the trip, including coaches and parents ! 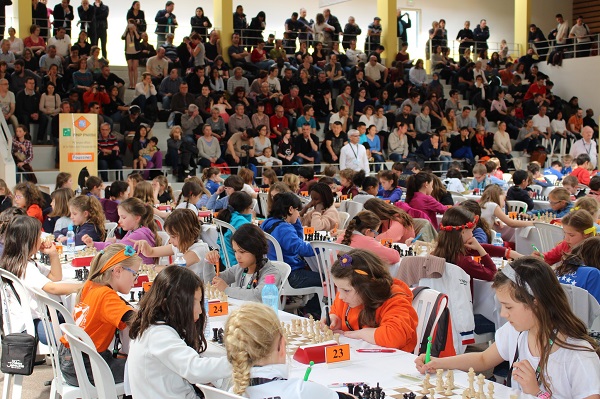 Photography of the playing room last year in Gonfreville l’Orcher

Schedule of the championship